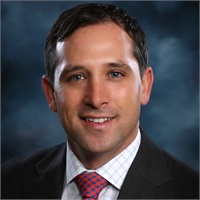 Samuel R. Gugliuzza, CMFC, has over 18 years of experience in the financial services industry. Sam began his career in 2000 as an advisor with Mutual of Omaha Investor Services. In 2018, Sam formed SLG Financial Advisors.  Sam and SLG Financial Advisors works closely with Emerling Agency in Clarence, NY for group healthcare and benefits for business planning. He also partners with United Healthcare for individual Medicare planning for retirees.

Having successfully completing the Life, Health, and Accident Insurance examinations, as well as the Series 6, Series 63, and Series 65 securities examinations, Sam is fully licensed and qualified to provide insurance and investment planning services in New York, as well as many other States within the U.S.  Sam also holds the Chartered Mutual Fund Counselor (CMFC) designation through The College for Financial Planning.

Sam has been a qualifying member of the Million Dollar Roundtable (MDRT) every year since 2008. While with Mutual of Omaha, he achieved the Mutual of Omaha Chairman’s Council for 11 of the 17 years with the agency. He also served on the agency’s corporate advisory council from 2016 to 2018 (one of only five advisors selected). He is an active member of the Financial Planners of Western NY association.

Outside of the finance world, Sam is an active member of First Trinity Lutheran Church in Amherst, NY. Sam is involved with the Sunrise Optimist Club of Lockport (a chapter of Optimist International). He has been an active service member since 2008, has served as the President of the club from 2012 to 2013 and is now on the board of directors.

Sam and his wife, are proud parents of two boys. In his free time, Sam enjoys spending time with his family, coaching hockey, playing Golf during the Summer, and Snowboarding during the Winter months.